Michigan’s district courts have jurisdiction to conduct trials and impose sentencing for misdemeanor cases. A misdemeanor is defined an offense with a maximum possible sentence of 1 year or less in the county jail. A felony is defined as a criminal matter that can carry more than 1 year, up to life in prison. District courts can administer felonies for the initial arraignment on the warrant/complaint and through Preliminary Examination. District Courts have jurisdiction for: 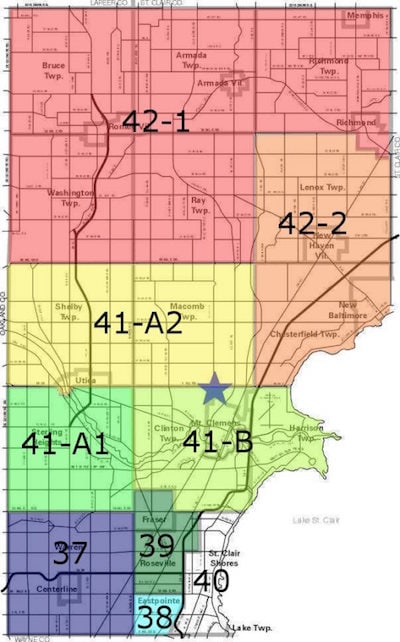 There are 105 district courts in the State of Michigan. Only the Grosse Pointe Communities continue to maintain municipal courts in the State of Michigan. The geographical location and the number of judges approved for a district court is determined based upon population and the court’s caseload. Districting can change based upon growth and traffic in a region. For illustration, the 41-A District Court in Shelby Township has only 1 judge presiding over matters that occur in Shelby Township, Macomb Township and Utica; an area of approximately 72 square miles. Compare this to the 40th District Court in St. Clair Shores which has 2 judges presiding over a land area of 14.28 square miles. As population expansion and court volume increases in geographical areas, additional judgeships and updated court buildings are approved based upon redistricting measures. The 41-A District Court in Shelby Township has already been given approval for a new court building which implies that a second judge may also be approved based upon the growing population in north Macomb County.

By clicking a link on the graph below to a particular court and geographical area, you will learn specific information about the selected jurisdiction and corresponding court system. We go a step further by providing practical advice not available anywhere else on the internet if you have a criminal, driving under the influence or traffic matter in any of these courts.

Felony Procedure in District Court: A felony is defined as a more serious criminal offense which can carry more than 1 year to life in prison. The felony process begins at the district court level but trials for felony cases are handled by the circuit courts in Michigan. Felony proceedings in district courts include the following:

ABDO LAW is a premier criminal and drunk driving defense law firm that has been based in Macomb County for more than 35 years. Our criminal defense lawyers have represented more than 10,000 clients in every Metro-Detroit Court (Macomb County, St. Clair County, Oakland County, Wayne County). Our clients consist of adults, juveniles that need skillful criminal representation from lawyers with the highest national ratings. In addition, we routinely represent clients from other states and Canada that find themselves in need of an efficient and effective Michigan criminal defense lawyer.

Email or Call Abdo Law for a Free Consultation. Phone messages after business hours are forwarded to our attorneys. We offer same day, evening, weekend appointments and the ability to retain us over the internet. Payment plans and all credit cards accepted.

Clinton Township, Harrison Township, Mt. Clemens and the 41-B District Court Eastpointe and the 38th District Court Chesterfield, New Baltimore and the 42-2 District Court (Division 2) Romeo, The North End, and the 42-1 District Court (Division 1) Roseville, Fraser and the 39-A District Court St. Clair Shores and the 40th District Court Shelby Township, Macomb, Utica and the 41-A District Court Sterling Heights and the 41-A District Court Grosse Pointe Communities and Their Municipal Courts Rochester, Rochester Hills, and the 52-3 District Court Royal Oak and the 44th District Court Warren, Centerline and the 37th District Court Madison Heights and the 43rd District Court
Practice Areas
Client Reviews
★★★★★
The level of service exceeded my expectations, your devotion to my refusal to settle for a lessor misdemeanor was reassuring and inspired, and the team's creative interpretation of the law in finding a comparable civil infraction was legendary. It was a five-star experience. Thank you for refusing to settle when I was innocent of my accused crime. Satisfied Client, Assault Charge DISMISSED
★★★★★
Matt and his staff...turned a terrible situation in my life into a positive life learning experience. Not many court cases end up being a positive in life, but Abdo Law delivered just that. Going with their firm was the best decision I could have made and I owe them everything for turning my bad decision into a extremely manageable situation. Thank you Abdo law!!!! Bill L., Satisfied Client
★★★★★
The Abdo Law Firm represented myself during one of my biggest times of need in my life. They handled my cases with ease and met my expectations far beyond what I anticipated. Not only did they got one, but two domestic violence charges completely dropped. I would have been lost without this five-star Law Firm. Satisfied Client, 2 Separate Assault Charges DISMISSED
★★★★★
Abdo law FOUGHT and got my DUI kicked out of court when my job was on line. Five Stars! Satisfied Client, OWI DISMISSED
View More
Submit a Law Firm Client Review