In Michigan, a defendant that is convicted of a felony or misdemeanor faces a sentence. A person is deemed convicted after a jury returns or verdict of guilty or the offender pleads guilty or no-contest. The judge presiding over the case is the only person empowered to impose a sentence. A sentence can include incarceration, probation, fines, court costs, restitution, house arrest and numerous other conditions. Ethically, an attorney may not guarantee a sentence. However, an experienced criminal defense lawyer is usually able to predict a sentence based upon the reputation of a judge, the policies of the sentencing court, a command of the sentencing laws and the results obtained in other similar cases. ABDO LAW has over 40 years of misdemeanor and felony criminal law experience in Macomb, Oakland, Wayne and St. Clair Counties and our attorneys have represented approximately 10,000 clients since 1980. We are ready to deal with cases that are straight forward as well as those that involve multiple criminal charges and complex sentencing issues.

There are several Michigan criminal statutes that play a part in the sentencing phase of a criminal case. The “Michigan Sentencing Guidelines” is a significant body of law that all Michigan judges are bound to follow when imposing a sentence for a felony conviction. Other relevant Michigan criminal sentencing statutes may provide for leniency (delayed sentencing pursuant to MCL 771.1, dismissal of drug crimes pursuant to MCL 333.7411) when applied at the time of sentencing. Conversely, certain offenses may allow a judge to sentence an offender pursuant to statutes which require a mandatory minimum prison term, consecutive sentencing or double penalty. ABDO LAW is a proactive law firm. In many cases, we may outline a plan in preparation for sentencing in the early stage of a case. This web page is dedicated to significant aspects of Michigan’s sentencing laws that arise in our criminal defense practice.

After a person is convicted of a felony, the defendant is required to be evaluated by the court’s probation department for a pre-sentence investigation report. A pre-sentence investigation report (PSI) is mandatory for all felony convictions and discretionary for misdemeanors. The report is made available to the judge, prosecutor and defendant’s attorney prior to sentencing. An attorney will make objections to any portion of the report that is inaccurate or disagreeable at the time of sentencing.

Abdo Law footnote: We utilize sentence memorandum extensively to supplement the PSI at the time of sentencing. A sentence memorandum is prepared by the defendant’s attorney. It allows the defendant’s attorney to submit positive material (counseling reports, medical records, character letters, military records, etc.) and request a particular sentence or attempt to persuade a judge to depart from the sentence guidelines.

What are the Michigan Sentencing Guidelines?

The Michigan Sentencing Guidelines, also known as the statutory sentencing guidelines, are required to be used for all felony offenses committed after January 1, 1999, for which there is sentencing discretion. The guidelines do not apply to criminal offenses which mandate a sentence (first degree murder = life in prison, felony firearm = 2 years mandatory imprisonment). The enactment of the guidelines is intended to provide statewide consistency, or fairness, in sentencing a defendant. This policy has come to be known as "truth-in-sentencing”. Essentially, the guidelines provide the sentencing judge with authority to impose the minimum range of sentence upon a defendant convicted a crime(s). There a certain calculations that go into determination of the appropriate sentencing guidelines:

Crime Classification Determines the Appropriate Sentence Grid: The first step in the process to determine a defendant’s guidelines is based upon the seriousness of the crime:

Abdo Law footnote: Negotiating a plea bargain to a lower crime classification can protect a defendant from facing more stringent guidelines which are associated with a higher crime classification. Reducing a felony to a lower felony or to an “attempt to commit a felony” are ways to achieve this goal. By reducing a felony to an “attempt”, the maximum penalty is cut in half.

Each crime classification comes with a grid or table which contains a sentence range. Certain variables need to be assessed before a defendant can know where he stands in relation to the grid. There are two (2) variables that are taken into consideration which need to be calculated beforehand which are “prior record variables” and “offense variables”.

Prior Record Variables: The sentencing guidelines take a defendant’s prior record into consideration. A specific number of points are assigned based upon prior felonies, prior misdemeanors, prior juvenile adjudications and whether the offender is in the criminal justice system at the time of the offense (probation or parole). The best case scenario is when a person scores zero points for not having any prior criminal or juvenile record. A bad record can place someone on a sentencing grid where minimum term of jail or imprisonment is required. The grid is also labeled to account for habitual offender status when a person has a prior felony record.

Offense Variables: In addition to the defendant’s prior record, the “offense variables” for the conviction offense that has the highest classification, or for every crime that may require consecutive sentencing, are computed for purpose of calculating the sentence guidelines. Offense variables are scored in terms of points based upon aggravating circumstances in relation to the criminal offense. Again, the best scenario is when someone scores zero points. However, there are several offense variables which are scored such as: psychological injury to victim, physical injury to a victim, amount of financial loss or damages, blood alcohol level, type of drug, etc.

Abdo Law footnote: When a defendant faces a incarceration based upon his or her minimum sentencing guideline range, the judge is required to sentence within the assigned range unless presented with substantial and compelling reasons to depart either upward or downward from the guidelines.

Class E Offense Sentencing Grid for 5 Year Felony (Drunk Driving 3rd Offense) For purpose of illustration, the following image details a sentence (Class E) grid for a 5 year felony. The boxes on the grid depend upon the points which are scored based upon the offender’s prior criminal record and offense variables. 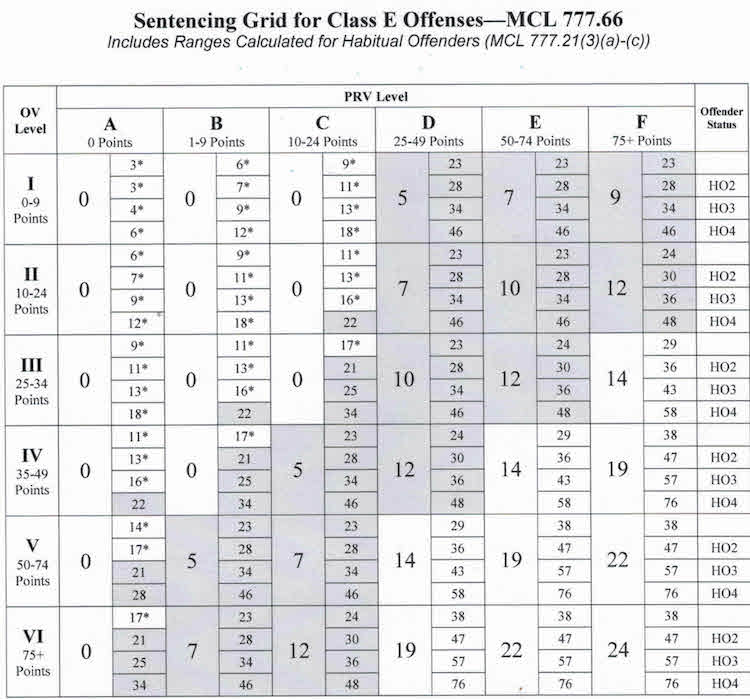 Upward or Downward Departure from the Guidelines

A judge may depart from the sentence range only where there are “substantial and compelling” reasons to do so. The court (judge) is required to state the reasons whenever a departure is made, either upward or downward. The reasons which may be considered for a departure are limited by statute and appellate cases but may include the facts contained in the court record, including the presentence investigation report that has been given inadequate or disproportionate weight. A court may decline to depart from the guidelines even when it has been provided with a basis to do so.

Abdo Law footnote: As we have mentioned, our firm will file a sentence memorandum whenever we feel that it will differentiate our client or when we are asking a court for any special sentencing consideration or a downward departure from the guidelines.

Alternative Sentencing Provisions Which Can = A Dismissal Of Crime!

An offender who pleads guilty to certain crimes may qualify for alternative sentencing and be entitled to a dismissal. The dismissal is granted upon a defendant’s compliance with the conditions of the sentence as ordered by the judge. The statutes which are referenced below all provide as follows: If an individual fulfills the terms and conditions of probation, the court shall discharge the individual and dismiss the proceedings. Discharge and dismissal under this section shall be without adjudication of guilt.

The following offenders may be eligible for special sentencing treatment:

Pursuant to MCL 333.7413 of the Michigan Controlled Substance Act, a repeat offender charged with a second or subsequent drug offense faces sentencing to “a term not more than twice the term otherwise authorized.” This statute has harsh ramifications which can enhance a misdemeanor drug crime, such as possession of marijuana, to a felony which can carry up to 2 years in prison. Moreover, the 20 year drug crimes (delivery of heroin or cocaine) can carry up to 40 years in prison if the offender has a prior drug crime conviction. A defendant in this position may offered a plea deal and sentence consideration by providing cooperation (undercover police work). An attorney should be secured immediately whenever a person is facing any drug charge and asked to cooperate with the police. There are often other legal options to avoid a conviction or severe punitive measures.

ABDO LAW believes that a person charged with a crime should be well informed about every phase of a criminal case. The sentencing phase is no exception and yet the subject is dodged by many attorneys. Based upon statistics, 90% of criminal offenders enter into a plea agreement and eventually face sentencing. For this reason, we stay sharp when it comes to plea bargaining, Cobbs Agreements, sentence departure requests and seeking alternative sentencing which leads to dismissals. When necessary, a sentence memorandum is utilized to distinguish our client as someone who deserves leniency, to neutralize a presentence report or to counteract negative sentiment that may arise in a criminal case.

Practice Areas
Criminal Law
Client Reviews
★★★★★
The level of service exceeded my expectations, your devotion to my refusal to settle for a lessor misdemeanor was reassuring and inspired, and the team's creative interpretation of the law in finding a comparable civil infraction was legendary. It was a five-star experience. Thank you for refusing to settle when I was innocent of my accused crime. Satisfied Client, Assault Charge DISMISSED
★★★★★
Matt and his staff...turned a terrible situation in my life into a positive life learning experience. Not many court cases end up being a positive in life, but Abdo Law delivered just that. Going with their firm was the best decision I could have made and I owe them everything for turning my bad decision into a extremely manageable situation. Thank you Abdo law!!!! Bill L., Satisfied Client
★★★★★
The Abdo Law Firm represented myself during one of my biggest times of need in my life. They handled my cases with ease and met my expectations far beyond what I anticipated. Not only did they got one, but two domestic violence charges completely dropped. I would have been lost without this five-star Law Firm. Satisfied Client, 2 Separate Assault Charges DISMISSED
★★★★★
Abdo law FOUGHT and got my DUI kicked out of court when my job was on line. Five Stars! Satisfied Client, OWI DISMISSED
View More
Submit a Law Firm Client Review